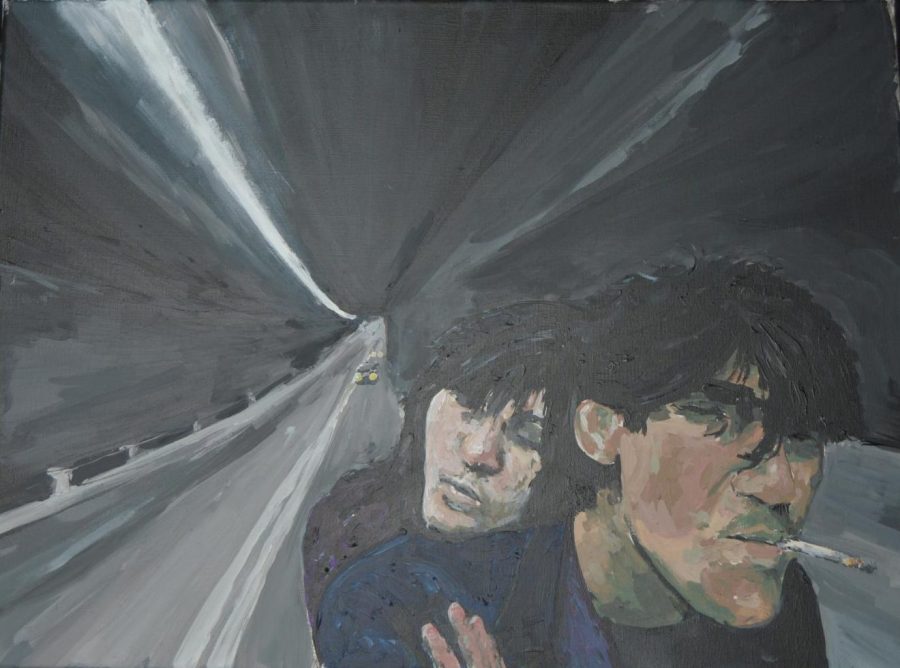 Speeding Down the Freeway with Them by Natasha Baumgartel

Multicolored lights flashed brightly as loud music blared throughout the hall. Crowds danced in tight groups, but no one particularly familiar caught his eye as he walked through the dense rows of people. The glowing fluorescents, which changed colors to match the melody, were meant to bring out livelihood, and so they did. Everyone wildly jumped, some moving with vulgarity as they threw themselves across the dancefloor. It was the third night of his ongoing party, and Mr. John Wilson was starting to find it tiresome. He casually walked across the room with hopes of finding some unlikely fresh air. In this day and age, the delight of such a thing was impossible.

As he moved away from swaying bodies, Wilson took note of the dull expressions on each person’s face. They were nameless and emotionless. How relatable, he thought. In truth, these people were only for show as he had just been recognized for his infamous wealth. Finally after years of exhausting work he had made it to the top, only to be greeted with retirement suggestions from his employees. Naturally, Wilson refused, for his tiresome work should have been congratulated only with future years. The man became easily riled up at the thought, they all want the same things I have, well work harder and they might have a chance at it,” he muttered to himself bitterly.

With that the sixty year old man resumed his stroll and reminisced about the past. As a child, John Wilson had lived through severe poverty; maybe this caused his intense obsession with money. That boy turned into a man who set his focus on success. At the age of only twenty five, he had already found a job at a business firm and continued to strive for economic glory.  Now he had gotten all he ever wanted, but what was left?

Eventually, he snapped back to reality and found himself in front of a familiar set of wooden stairs.

“A pain it is for an old man like myself to climb these dreadful stairs,” he quietly grumbled. The small, stocky man started his ascent with a sluggish pace. Mr. Wilson took short, labored breaths and cursed for forgetting his inhaler and supplements. Years of stress and anxiety had depleted his health. Finally, after catching his breath the man trekked across the floor to resume his lonesome journey.

Wilson slowly walked up the steps, almost tripping on the empty bottles of champagne and shiny broken glass. For a moment he paused to look back at the glistening shards as they gleamed in their own slow silence. Continuing on his journey, he could hear the tapping of his own feet on the dark sandalwood floors.

Mr. Wilson couldn’t remember quite when, but the music had faded away and despite the now dim lighting, he could recognize the traces of the artwork that decorated the hallway. It has gotten rather quiet – a good decision it was to keep this place soundproof, he thought before continuing. The mansion resembled a palace and was covered with shining ornaments to express absolute luxury. The trims of every wall were lined with gold and famous paintings hung to cover any bare spots. Wilson loved to collect art and his favorite pieces were the crystal sculptures that could be seen at every corner of the building, each depicting an image from his own life. Vain as it may seem, he loved the innocence of those works and the lies they were based on. Once in a moment of rage he had stormed through the house smashing everything in sight. But just as they were gone, newer and even shinier ones took their place.

He approached a tall mahogany door that was intricately designed with delicate carvings. But something was different and unforgettable about the room. An eerie silence had followed the creaking hinges as Mr. Wilson walked in. All the while, he took note of the room’s various displacements but could find nothing missing. Despite the shadows, he knew someone else was here.

A curtain fluttered tensely as if yearning to come closer. Bang! A dark figure climbed out of the room from the open window and with a slam jumped off the ledge, leaving Wilson startled. He clutched his now pounding chest and quickly rummaged through the wooden desk next to his bed, eventually finding a dark shiny pistol. As speedily as a man of his age and health could, he scurried soundlessly across the dark rug and pointed the weapon around the room in search of another trespasser. When he finally accepted that he was alone, the man sat down on his plush bed.

How intrusive, he thought. It was not Mr. Wilson’s first encounter with thieves. Those rats have nothing better to do with their impoverished lives. If anything, find a way to get out of such a wretched situation, like the rest of us! he inwardly exclaimed. Yes it was true that he had made his way to the top by cruel means, but at least it had a long lasting effect. Looking around he made sure that nothing had been taken. At the center of this fine room was a clear glass table and laid upon it was a manila envelope. Wilson got up, he listened to the shuffle of his own feet on the Persian rugs with curiosity running through his veins.

Soundlessly, he picked up the cool envelope.

“Dear God, it can be,” the old man wondered aloud. He peeled open the note and read silently:

On behalf of your business partners and board of directors, we would like to congratulate you on your greatest achievements and sixtieth birthday. We appreciate your many years of hard work and would like to offer you an extended break. Fear not: many others are willing to temporarily handle your position. We have left you a gift with the hopes that you will understand our reasons. A man like yourself should be well acquainted with such a prize. We apologize for the brash obtrusion and thank you.

A grim message but done rather elegantly, he thought while picking up a small jar which had been strategically placed next to the card. A true shame, but it seems that I am no longer needed. It is most definitely a decision I would have made, he thought honestly.

With a sudden jerk he opened the bottle and placed the cap on the counter.

“Oh but I’m not quite ready! My reputation would be ruined if they found me like this!” he exclaimed. He put the jar down and sat upright, running his fingers through his thin, grey hair. Smoothing out his suit jacket and straightening his tie, Wilson looked back at the vile. He gasped, thinking about the flavor and sprung up to grab one of his finest flutes along with a bottle of champagne. Almost with the ease of a younger man, Mr. Wilson opened the bottle and poured himself a cup. He then poured the unknown contents of his gift into the flute, and inhaled the musky scent.

Wilson watched the clear bubbles before downing the liquid with a quick swig and placing it gently on the table. Straightening his body yet again, the man stared forward and thought of nothing. Waiting, his mind was as empty as the flute he had grasped just a moment ago. He continued to wait.

The Gillnetter • Copyright 2020 • FLEX WordPress Theme by SNO • Log in