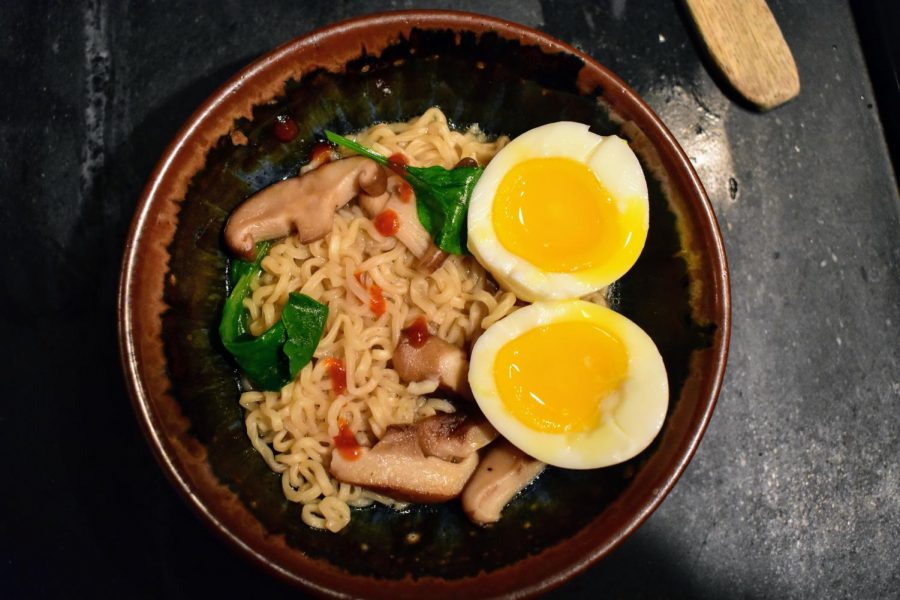 Ramen, topped with an egg and bit of sriracha, and ready to eat!

Has quarantine hit your cupboards yet?

We all know the feeling. Days ago, in a flustered attempt to take the proper pandemic precaution, you hunkered down and swore off human contact. It was alright (albeit strange) at first, but time is passing, and the snack cabinet situation is starting to look grim. You reach blindly back, passed dusty cans of Campbell’s, hoping in vain for something of substance. But alas! – the only sustenance which remains is that post-apocalyptic necessity, (you guessed it!) packaged ramen.

3 minute noodles combined with that magical powder packet (aka MSG) make ramen noodles a dish unmatched by any other. It’s a cultural staple; addictively salty, undeniably easy, and most importantly, quick. But this hyper-processed food item didn’t always indicate unskilled chefs and cramming college students. In fact, ramen has an incredibly rich history.

Ramen chronicles a unique version of the cultural and political relationship between Japan and China through the post-classical period and into the 20th century. The dynamic was complex – and often messy – and ramen’s story certain follows suit.

The dish was invented in China (despite being thought of as fundamentally Japanese), and crossed the Sea of Japan at some undocumented time to establish itself in the island nation. China had extensive cultural influence on Japan during the Tang Dynasty, laying the ground for culture sharing between the two countries.

There are two theories on how ramen made the transition. Simply stated, one postulates early exposure; a Chinese scholar fleeing Manchu rule brought the soup to Japan during the reign of the Tokugawa Shogunate. The other, (ramen scholars consider this one to be more reasonable) suggests that it traveled to Japan around 1910, when Rai-Rai Ken opened up in Tokyo. This restaurant hired Chinese chefs and introduced Japan to a dish it called shina soba. It was an attempt to ‘Japanify’ a classic Chinese dish; shina means China, while soba is a well-known Japanese noodle.

Assuming the latter explanation, ramen’s history following the journey to Japan gets exciting. Similar to today, shina soba became popular with the working class because it was inexpensive and a decent meal. However, at the time the dish still had intense Chinese implications, and that was a complicated thing to have in pre-WWII Japan. The result was a rise in the dish’s popularity with political radicals and military personnel.

On the whole, the second World War was fully detrimental to ramen’s renown. In fact, according to First We Feast, a website dedicated to food, selling ramen during the war “could and did land people in jail”. During that time, it was illegal to make a profit in the food industry (wartime restrictions on restaurants were intense). “Black market” wheat, which could be used to make the iconic ramen noodle, thus became a valuable illicit product.

Following nationalization and industrialization in Japan (and globalization throughout the world), ramen became internationally popular, and increasingly Japanese. But how did it make the jump from authentic Asian cuisine to American packaged good?

According to the Maruchan website, the company was founded in 1953 by a Japanese man called Kazou Mori. Mori created the company to process and distribute frozen fish, and named it Toyo Suisan (for their original explanation, click here).

In ‘61 the business expanded from fish to instant ramen, and diversified its consumer audience by establishing a production center in Irvine, CA. Today, their centers span the country. And their ramen can be found in just about every supermarket.

Craving ramen yet? This recipe (adapted from the Budget Bytes website) offers an opportunity to capture that unparalleled flavor without so many unknown additives. So grab that dusty package from the back of your cabinet and throw away the magic packet! All you need are the noodles.

½ cup sliced shiitake mushrooms (more if you like them)

Heat sesame oil in a saucepan, then saute garlic and ginger for about a minute
Add mushrooms and cook for about 3 minutes
Add chicken stock and water
Bring to a boil; while you’re waiting soft boil the egg (do this by boiling it for exactly 6 minutes and immediately chilling)
Add instant noodles (but not the flavor packet!) and cook for 2 minutes
Add the spinach and cook for 1 final minute
Serve with the egg (cut in half) and hot sauce to taste