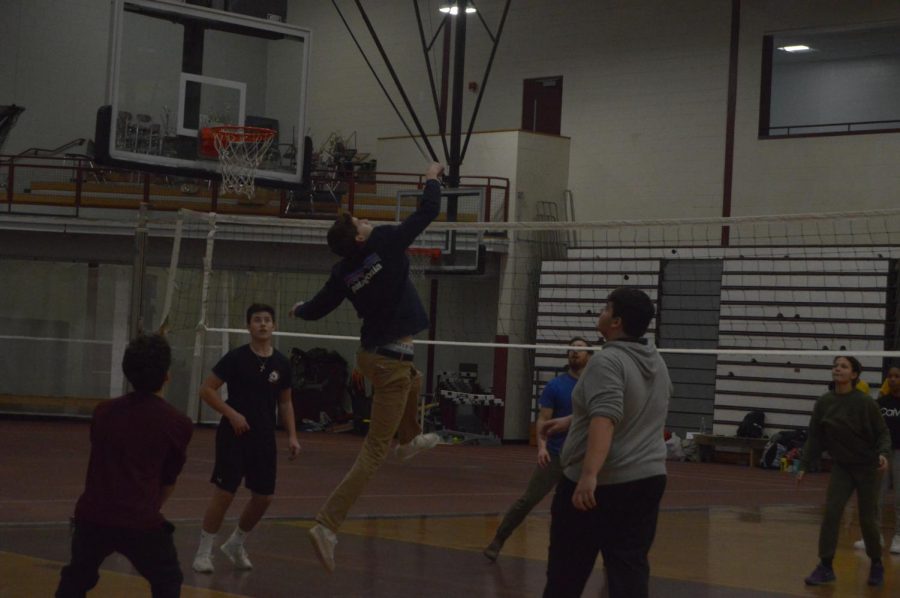 Patrick Hunt flies through the air to spike the ball

The most greatly awaited sports season has begun again at GHS! This week and last, students and teachers battled for intramural ascendency, serving, spiking, ducking, and diving in their quest for the title of volleyball champ.

For those of who haven’t had time to drop in on a game, here’s a quick recap of games and standings.

The most recent matches were held on Monday. See the scores below:

Coming out of Monday, Empire Spikes Back has the most impressive overall stats; with a win-loss record of 7-1. Iron Curtain, Devil Dogs, Average Joes, and Notorious FC are all both close behind, each with records of 6-2. Italian Stallions boast the longest win streak (5 in a row), though many other contenders are staying stronger with streaks of at least 2.

Today, there will be six match ups, the first beginning and 2:20 and the final at 3:00. Stop by the gym after school to check it out.

2:20- Devil Dogs vs. Notorious FC  and  The Freezers vs. Disaster Drill

2:40- Italian Stallions vs. Censored  and  Empire Spikes Back vs. Sneak Attack

3:00- Iron Curtain vs. Average Joes  and  Abstinence vs. SWAT Team