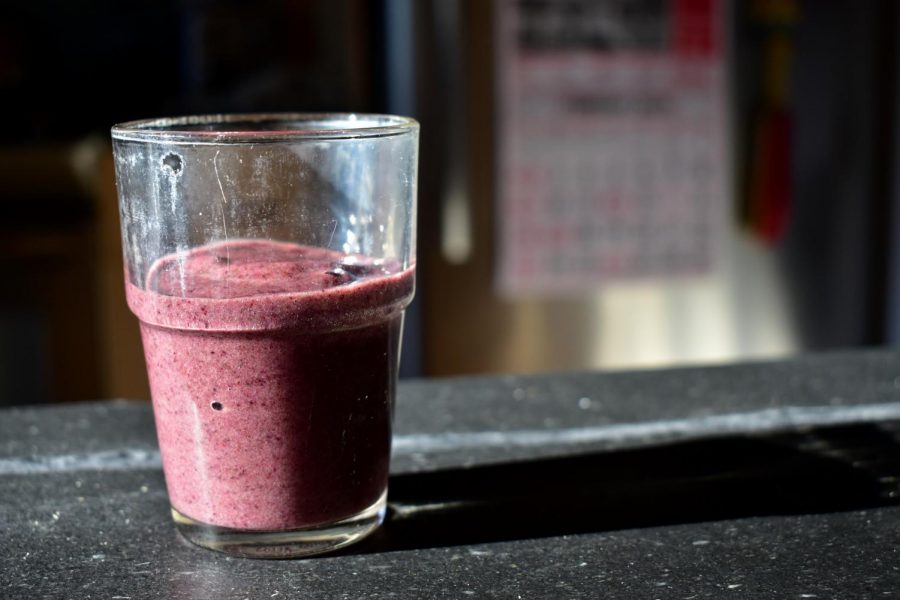 The smoothie, ready to drink

February marks the start of the worst part of winter. We’re tired of the cold, but there are months of it to come, and the balmy days of summer seem impossibly far away. Luckily, there’s a way to fight those nagging frosty blues! This month in Edible Histories we’re exploring a fruity classic guaranteed to get you in the sunshine state of mind: the smoothie.

You’re probably asking yourself if the smoothie even has a history to be told. Afterall, it is just fruit that’s been thrown in the blender. But this icy treat, revered by nutritionists and foodies alike, has had undergone unique evolution in the last few decades.

People have been smashing and sipping fruit for thousands of years, though it can first be traced to the Mediterranean and Eastern Europe. More recently, the birth of the smoothie as we know it can be attributed to the invention of the blender. This occurred in 1922, when a Wisconsin inventor named Stephen Poplaswski conceived of a machine for use in soda fountain restaurants. He intended it to be used for mixing milkshakes and malts.

Later, Fred Osius and Fred Waring partnered to better the original design. Eventually, Osius created the Waring Blendor (no it’s not a typo, he preferred that spelling), which was first sold in 1937.

During the same era, home refrigeration became common. The ability to keep perishables in the home revolutionized American cooking. Particularly, the ability to purchase and store fruits that were out of season led to the rise of the smoothie.

Smoothie culture really exploded in the 60s as hippie counterculture began to impact the American food industry. The iconic group may be best remembered for their far out fashion and radical views, but their greatest legacy likely lies in food. The hippies spurred the eco-nutritional movement that has altered our edible landscape. They paved the way for today’s locavores, vegans, and vegetarians. They also introduced new dishes, such as avocado toast, acai bowls, and smoothies.

The focus on gut health and macrobiotic diets spread quickly to other areas of society. For example, Arnold Schwarzenegger and other bodybuilders of the time touted the power of protein drinks and other such items.

The linguistic evolution of the smoothie is also interesting to explore. According to wordgenius.com, in the “1920s, smoothie was used to describe a suave, self-assured person, particularly when interacting with the opposite sex. This collegial term remained a part of youth culture and, by the 1960s, was applied to a variety of things that were considered slick, suave, or attractive – from ladies’ undergarments to smooth-writing ballpoint pens to automotive paint. Smoothie was actually part of the hippie vernacular at this point”

It was adopted as a culinary term in 1973, when Steven Kahnau founded the Smoothie King chain.  Kahnau created his business and used the popular hippie term, smoothie, as a name. He thought that through this name his product might be associated with the health conscious lifestyle the counterculture championed.

He couldn’t have been more right. From green smoothie cleanses, to post workout protein drinks, smoothies remain a symbol of healthy choices.

Craving a smoothie yet? Check out our favorite fruity recipe below.

You should know that this writer is actually a terrible smoothie maker. Rest assured though, the recipe was developed with the help of a friend with a far more masterful touch. Don’t be concerned at all about the measurements (we certainly weren’t); just make it to taste.

Water (add at the end only if too thick)

Ice (add if your assorted fruit is not frozen)

Toss fruit, spinach, and juice in the blender and blend until the desired consistency has been reached (2-3 minutes). (If you have an old or weak blender, add ingredients in the order listed and blend between additions.)

If your fruit was not frozen, add ice to thicken and chill.

If the smoothie seems too thick add water, or more orange juice