Reflecting on Too Fat for China 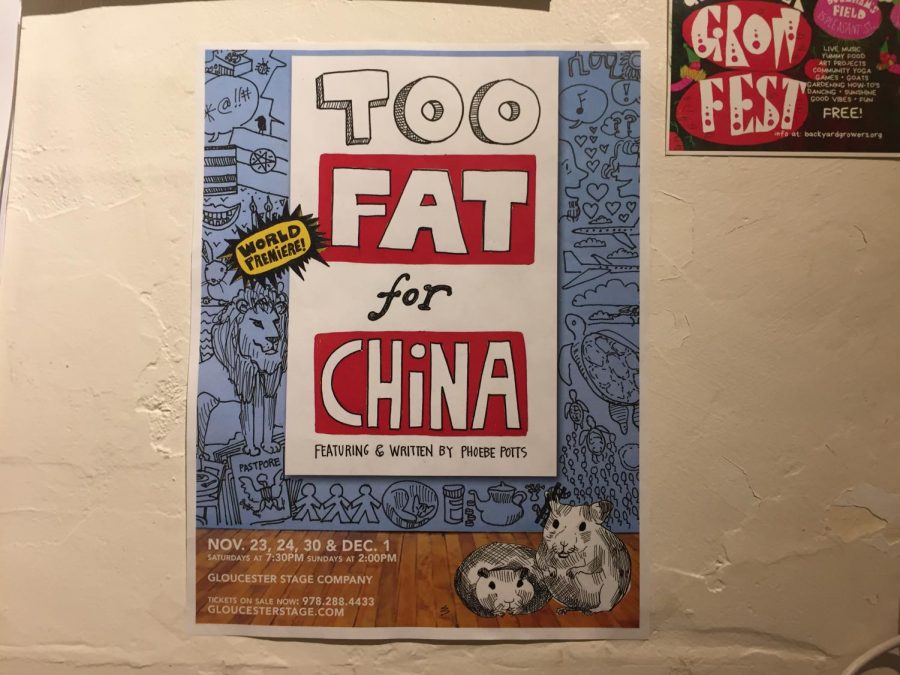 The concept of having a story – the building of it and the telling of it – forms the crux of Phoebe Potts’ recent production, Too Fat for China. This poignant crossover between stand-up act and social critique conveyed the physical and ethical “agony of adoption” via a series of well-delivered anecdotes.

The piece was performed at Gloucester Stage Company for a brief two weekends at the end of November, and the past few weeks have served as an interlude during which the flurry of news surrounding the show has settled. Luckily, however, the impact of such an ambitious undertaking cannot fade as fast.

Curious about the show’s legacy, as well as the process of putting it together, The Gillnetter turned to the creator herself.

Q.Why did you become an artist?

Q.What has it been like to develop your art on Cape Ann?

A. Cape Ann gave me an audience for my work- both my comics and my storytelling. [It provided] a range of people from different backgrounds who are generous listeners and who show up for things like the Gloucester Writers Centers Fish Tales, or plays at the Gloucester Stage, or book readings at the Sawyer Free Library and the Bookstore of Gloucester. People come out to see stuff here and are appreciative of the art and the artists.

Q. You recently performed a one-woman show at the Gloucester Stage Company.  Can you summarize its content?

A. Too Fat for China was a one woman comedic performance about the murky ethics and absurd situations inherent in adopting a child.

Q. It seems like an amazing feat to write and perform your own piece of art.  What did it take to put your show together? What were the challenges?

A. There were a lot of stories and questions and ideas that were generated from my experiences with domestic and international adoption. The biggest challenge was choosing which pieces to use that would move the entire story along. I had a lot of information to share – information that folks don’t know if they have never adopted – but I didn’t want to be pedantic. I wanted people to get close to the story.

Q. What compelled you to share this story? What inspired you to choose this medium? (If I’m not mistaken, you’ve already published a memoir in the form of a graphic novel.)

A. I love to draw comics about myself. I also love to tell stories about myself. I was the Storyteller in Residence for Fish Tales in 2018, and while I did that I found that I loved the immediacy of working with a live audience. I still draw and write my comics, but I want to SPEAK.

A. I say at the beginning that this is a story about the terrible things I did for love – and they are pretty terrible. [There were] active and passive acts of racism, and the use of my buying power as a white person to get what I want, no matter the cost to the humanity of others. Anytime I felt some inner resistance to share something I broke it down. The resistance I was feeling was often a sign that it was something worth exploring for a story.

As for my family, my husband knows that he is fodder for my stories, and is often the straight man for my jokes. He’s supportive of the process. The end of this story, not the whole story, is that we got to adopt a beautiful baby boy from Ethiopia. My son knows his adoption story, and there are elements of his story that I did not share so as to protect his privacy. I was deliberate in telling the story as it happened to me, and not interpreting what it might be like for him. My son did charge me, however, for the use of his likeness in the photos at the end of the show. He felt it would be embarrassing for him, but if he got paid for the photos, we would be square. I thought that was fair.

Q. The story you told was certainly a mixed bag, and I had a variety of takeaways.  What did you hope to impart to your audience through this story? What was your intended impact on the community, both local and more broad? Did you hope to in some way impact yourself or your family?

A. I wanted to entertain, to be funny, and to be witnessed. All this stuff happened to me and I want to tell about it— but I don’t expect an audience to listen, let alone pay for it, unless it’s a really good story with a lot of good jokes.

Q. Did you have a specific message for the adoption industry?  For adoptive parents or those looking to adopt?

A. No. Yes. I don’t know. Adoption is wildly unregulated and riddled with corruption. There are millions of people who cannot adopt; they are barred from the process because they don’t have the money. There are tens of millions of children in the world who desperately need families. There are even more people who don’t have access to basic health care and birth control, or the control over their own lives to raise their children, through no fault of their own. I loathe the process, and yet without it, I wouldn’t know my son, and I am deeply grateful that I was able to adopt him.

Q. What sort of response did you get from people?  Were they receptive?

A. So far, positive. Of course it helps that I stocked the theater with all my friends.

Q. What is your next step for this project?  Where would you like to go with it? Why?

Q. The art of storytelling seems somewhat underrepresented, or least, underrated.  What is your hope for the future in terms of projects like these? Do you think your work will help others find their voices?

A. There seem to be more and more venues for folks to share their stories. But it’s not enough to barf up your feelings into a microphone. You’ve got to build your story. It’s work, like all other art. I wonder if my age might be the inspiration to shake a few more people loose – I think seeing a middle aged lady who is not magazine gorgeous might give other people the idea that if I can do it then they can do it too.