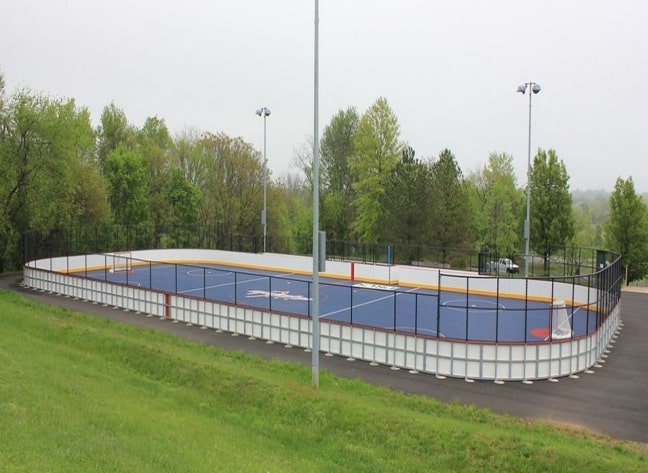 Say goodbye to the basketball courts, and make way for a street hockey rink at Stage Fort Park.

On December 10th, Young Legends Street Hockey stood before the Gloucester Community Protection Committee in order to get a grant of up to $100,000, which would pay for approximately 33% of the total $306,894 in expenses for a street hockey rink.

This grant will pay for a new 140 by 72-foot long street hockey rink. This includes boards for the perimeter of the rink, special tile specifically for street hockey, lights, bleachers, and a snack shack.

The Committee unanimously approved the request, adding $100,000 to the previously raised $15,000.

Young Legends Street Hockey is a recreational sports league for kids in grades 3-8. Founded in 2004, it was the first organized Street Hockey League in Gloucester. It started with four teams and has since grown to have over 1000 players participating in the last 16 years and up to eight teams in a season. Young Legends strives to “improve a player’s potential both on and off the court.”

Dylan Orlando, former player and current coach of the championship-winning Maple Leafs says the current basketball court “really restricts play. the crack down the middle of the court especially restrict play and has caused many injuries for players this season.”

“It will serve multiple purposes,” Says league President Carl Ellis IV. “We can use it for soccer, lacrosse, and we can still use it as a basketball court, Dodgeball can be played there. Women’s roller derby has been very popular recently so the rink can be used for that. We hope that the rink can be used by the community and even the surrounding communities.”

“Our biggest goal for the community is to have a facility where people can have the opportunity to go play pick up street hockey with friends or even parents and their kids can go shoot around and make memories,” stated Ellis.

“This is awesome,” said City Councilor Steven LeBlanc, Jr. of Ward III. “Let’s get the kids off [their phones] and playing street hockey. I played street hockey growing up and we went to little mom and pop stores and asked for them to buy t-shirts for us so we could go to local neighborhood schools and have our own group. But to have a place for kids and me and some of my buddies to go and shoot around is going to be amazing.”