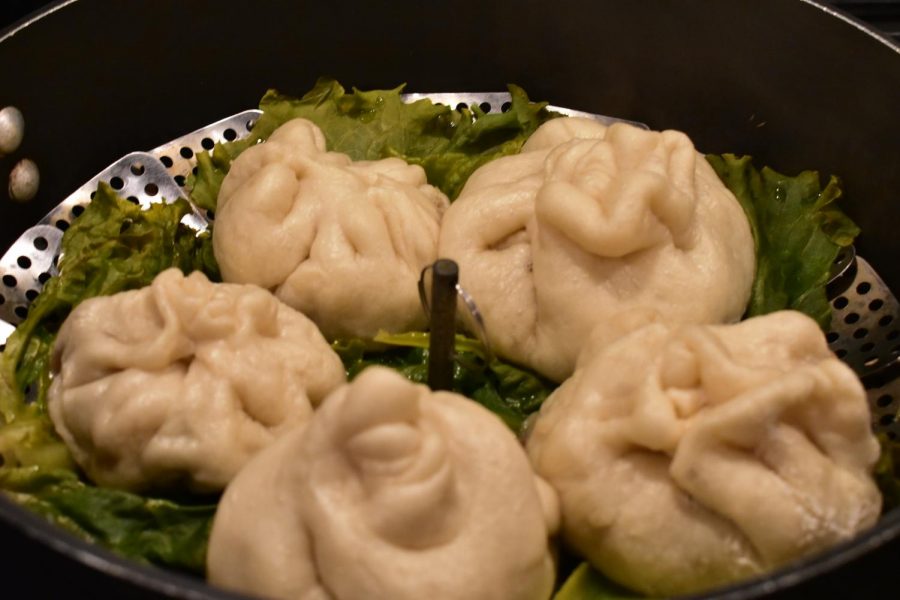 Baozi, after being cooked.

These soft, filled pouches date back thousands of years in China and comes in several varieties. According to China Daily, legend has it that they came about during the Three Kingdoms period (220-280) about 1,800 years ago.  Lack of a ruling empire during that time led to the generation of rule by government factions and, consequently, skirmishes between warlords and their forces were common. During this time, military strategist Zhuge Liang was involved in a conflict when his army was overcome by the plague. In an act of homage, the man cooked up a feast of steamed and stuffed buns shaped like human heads. This strange sacrifice was intended to cure the army’s illness.

The buns were originally known as mantou, meaning flour head, and in southern China this name remains. However, in northern China the term bao –which means wrapping evolved. Hence this tasty item is often referred to as a bao bun, or baozi.

If you’re looking to order the authentic version of the bao bun, know that where you go in China will dictate what you recieve. Baozi can be steamed or fried, and feature both meat and vegetarian fillings.

From Shanghai come two classic variations, xiaolongbao and pan fried baozi. The former features a thin, delicate steamed skin and resembles a small dumpling more than a bun. The latter is similar in size but is fried rather than steamed.

From Sichuan come Chengdu pork baozi which are one-of-a-kind in their filling. These are filled with a mixture of pork meat and fat, then flavored with ginger and Sichuan peppercorns.

Goubuli baozi come from Tianjing and are not a variation, but a famous brand of baozi. The direct translation of this name is something along the lines of ‘dog ignores’ and it comes from local folk history regarding the company’s founder.

Other types of baozi include soup dumplings (tang bao) –which are filled with a collagen based meat jelly that melts to broth when steamed– smashed bean dumplings –which are bready and sweet– sugar baozi, and tofu baozi.

However, for our purposes the most important baozi is cha siu bao. This pillowy staple hails from the Guangdong province and is also known as the barbecued pork bun. Cha siu bao has a thick outer skin with a texture similar to bread, and is generally filled with pork. The recipe provided below produces baozi which most clearly resemble cha siu bao. If you’re interested in learning more about baozi click here.

Ready to put your baozi knowledge good use? Originally from culinary blog Woks of Life, this recipe produces soft, puffy baozi filled with ground pork and packed with classic Asian flavors.  It requires some forethought, because the dough must rise for an hour before assembly of the buns, but the result is completely worth it. Alternatively, if you’re not in the mood to work with flour at all, just make the filling and toss it on sandwich roll for a tasty lunch!
Baozi (Steamed Pork Buns)
Ingredients
For the dough:

Instructions
To make the dough:

In a large mixing bowl or mixer with a dough hook attachment, completely dissolve yeast and sugar in lukewarm water. Wait 10-15 minutes to let the yeast become active and foam up.
Add in the flour ½ cup at a time and knead for about 15 minutes. Adjust the last ½ cup flour accordingly. The dough should be soft––not sticky and not too firm. Once the dough is even and smooth, form it into a ball. Cover it with a damp kitchen towel and let it proof one hour in a warm place. (If kneading by hand, knead the dough until it’s as smooth as a baby’s butt!) While it’s proofing, make the filling.

To make the filling:

Add the ground meat to a large mixing bowl and stir in 3 tablespoons water until well incorporated.
Now preheat the wok or a cast iron pan until it starts to smoke lightly. Add in 3 tablespoons oil, along with the minced ginger and diced onion. Cook over medium heat until the onions soften. Add in the ground pork and turn up the heat, stirring to break up any large chunks. Cook until all the pork turns pale and opaque––there is no need to brown or crisp the meat.
Add wine, dark soy sauce, sweet bean sauce, ground bean sauce, oyster sauce, sugar, white pepper, and sesame oil. With the heat on high, stir everything together until well-combined. Taste the filling and adjust seasoning if needed.
Cook for a couple of more minutes to cook off any remaining liquid. Stir in the cornstarch and water mixture, allowing everything to bubble together for 30 seconds to a minute. Turn off the heat and let the filling cool uncovered. After the filling has cooled, mix in the chopped scallions.

To assemble the baozi (buns):

After the dough has finished proofing, turn it out onto a clean surface dusted with flour. Knead for 2 minutes to get rid of any air pockets. Weigh and divide the dough into 20 equal pieces (each should weigh about 48g-50g).
Take each dough ball, and with a rolling pin, roll it from the edge towards the center, without actually rolling the center of the dough. The goal is to flatten the dough into a round circle with a thinner edge and thicker center. The difference in thickness should be about 1:2. Add some filling to the center.
You can start with a smaller amount of filling until you get the hang of the folding/pleating. The buns are folded with one hand holding the skin and filling, and the other hand pleating the edges of the dough disk like an accordion. As you fold, the goal is to make it all the way around the circle, until you’ve sealed it at the top. You’ll be making about 10-15 folds. Lay the buns on a small piece of parchment paper and put it directly on your steaming rack. Repeat until all are assembled. Let the buns proof (covered) for another 15 minutes before steaming.
If you’d rather not pleat the buns at all, simply pinch the edges of dough around the filling and pinch to seal tightly. Then simply flip the buns seam side down, cover, and proof for 15 minutes.

With the buns in the steamer, start with cold water and turn on the heat to medium. Set the timer to 15 minutes.
After 15 minutes, turn off the heat, and keep the lid on. Let the buns “rest” for 5 minutes before opening the lid. Missing this step will cause the buns to collapse.

Visit the Woks of Life website at https://thewoksoflife.com/steamed-pork-buns-baozi/ for more tips and tricks about making baozi!