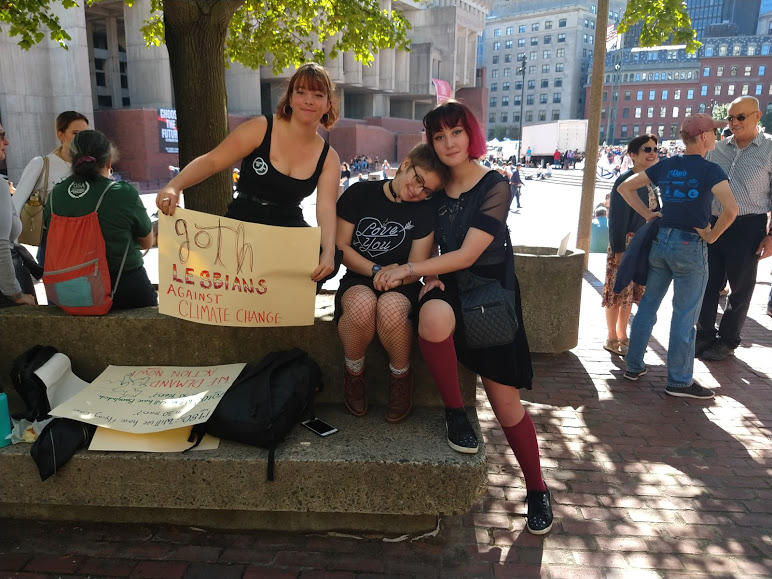 On Friday, September 20th of 2019, Boston participated in the Global Climate Strikes to demand reform regarding climate change.  Around 7,000 people were reported to be in attendance. The strike began at Boston City Hall, where speakers such as Mayor Marty Walsh and former Head of the EPA, Gina McCarthy, voiced demands for action. Three main demands were made:

“I think kids need to be the ones standing up for the climate because we’re the ones this is really affecting,” said  ten year old Fiona L. sporting Greta Thunberg inspired braids.

Of course, people of all ages turned up to show their support, including Monica Nevius (age 57), who’s been striking for as long as she can remember.

“It’s been obvious for decades that this was going to be a huge problem. The issue is that my generation just hasn’t been very helpful,” said Nevius.

She went on to mention that her love for the environment had lead her to get a PhD in environmental sociology. Nevius is a part of environmental organizations such as “350.org” and the “Citizens Climate Lobby.”

The majority of strikers, however, were Massachusetts high school students, all of whom seemed to feel entirely justified in their decision to skip school for the cause.

“A few absences don’t matter if we’re going to be underwater in a few years,” said 17-year-old Audrey G. from Brookline High.

“All of us were reluctant to come here. But that’s the point. It’s an inconvenience, but it’s important.”

A common thread in our conversations was hopefulness, due to the large turnout. With news helicopters flying overhead, people felt sure their voices were being heard.  The gathering of several thousand people marched all the way from Boston City Hall Plaza to the statehouse, chanting and raising their signs high the whole way.

Once at the Statehouse, about 100 activists were able to go inside, while the rest remained outside, continuing their protest.

The event, which was organized by people all under the age of 20, was met with a crowd of like-minded people–young, diverse, and passionate. The message is clear: our youth are here, and they’re ready for change.