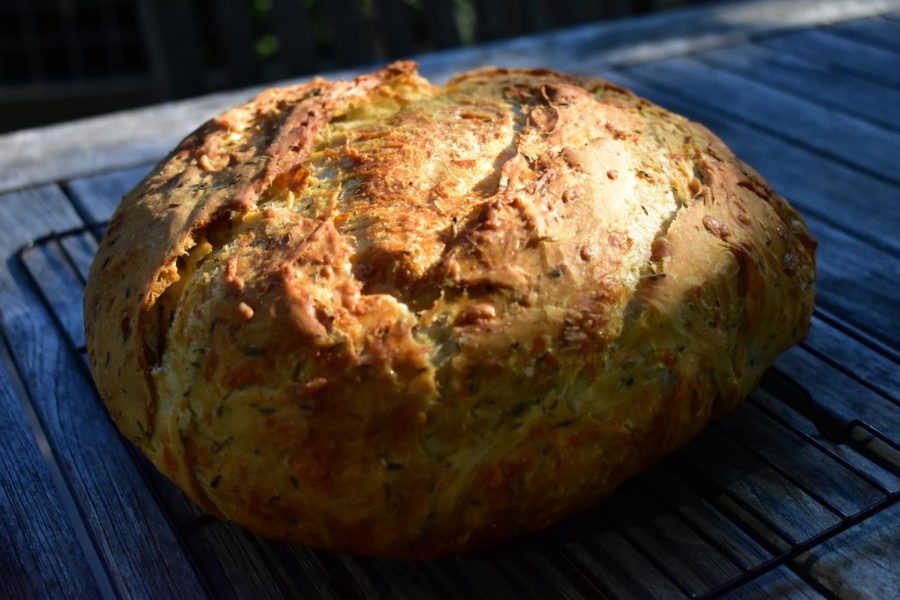 The final product, baked and cooling!

For October we will showcase a global food staple: bread.

Bread is the most highly consumed food in the world, and its varieties cross all geographical and cultural boundaries. From pita to pumpernickel, the art of cooking carbohydrates has been around for at least 30,000 years.

But, the fluffy store bought slices we know and love had humble beginnings. The quest for bread began with gruel. Prehistoric people mashed grains with water, to create a mush relatively similar to oatmeal. This paste was next cooked on hot rocks, resulting in what was basically a flavorless cracker. These most resembled what we might now call naan or tortillas. As time passed, ancient civilizations developed their own flair for baking, including the introduction of leaveners (such as yeast). It’s been said that the Greeks had 72 different varieties, while the Egyptians kneaded some types with their feet!

Bread is also deeply ingrained in the politics of history. It was a symbol of status; the poor received the dense, coarsely ground loaves while the wealthy could afford flour that was finely milled. And the well known phrase, “bread and circuses” actually has a history rooted in bread. To pacify a discontented lower class, the Roman empire provided free entertainment (via the Colosseum) and subsidized grain. Consider also the French Revolution; starving peasants rioting in the streets to get a single loaf.

Luckily for us though, bread doesn’t mean all the same things today that it did then. Nor is it made the same ways. 20th century additions such as bleach and preservatives have made bread look whiter and last longer. Enriched flour (which has added vitamins and minerals) is also a new development.

For those of you inspired to put this knowledge to use, here’s a tasty recipe for the amateur baker developed by Gillnetter editor Mila Barry.

This aromatic loaf goes best with a little butter. Imagine a sort of huge, wholesome Cheez-it…. that’s basically what you’re getting here. We tend to be a little heavy handed with the thyme (so if you don’t love the flavor, feel free to cut it back.)

*** Note: The recipe requires a dutch oven, or deep cast iron pot with lid, for baking

In a small bowl or cup, mix yeast with 1 tbs flour and 2 tbs lukewarm water. Mix well, cover,  and set in a warm place to rest for about ten minutes
At this point there should be small bubbles visible in the yeast mixture. Measure 2.5 cups flour in a large mixing bowl. Add salt and thyme, then stir to combine.
Add a little extra water to yeast and swill it around so that there is little residue on the sides of your small bowl. Pour the yeast mixture in the flour and stir until it has all been absorbed.
Fill a measuring cup with 2 cups of lukewarm water. Begin adding it slowly, in increments. YOU WILL NOT NEED ALL THE WATER!  Continue adding until you have a soft, slightly sticky dough that holds itself together. I like to use a hard spatula or plastic paddle to make stirring easier at this stage.
Turn dough out onto a floured surface and begin to knead. Do this by repeatedly stretching it, folding it, and compressing it with the heel of your hand. This usually takes between ten and fifteen minutes. You’ll know your done when the dough springs back when poked gently.
Lightly oil your mixing bowl and place your dough back into it. Cover with plastic wrap and let rise for 60-90 minutes (or until it has doubled in size).
Preheat the oven to 425 degrees Fahrenheit, place dutch oven or pot in the oven to heat up.
When your bread is done rising, turn it out onto a floured surface and gently press it out. Beginning adding the grated cheddar by folding it into your dough. Once the two are combined, cut a piece of parchment paper to line the bottom of your mixing bowl, and then place the dough back in for a second rise (the parchment paper will make the transition to the pot easier).
Let the dough rise for about 40-45 minutes.
Slash the top of the loaf and use the parchment to pick it up and move it into the hot dutch oven. Quickly put on the lid, and place the whole thing in the oven. Bake for 20 minutes.
Check the bread. If it looks golden on top after 20 minutes, take off the lid and let it finish for 5-10 with the lid off. If its doesn’t look golden, give it another 5 before removing the lid.
When done the bread will have a deep orange crust and sound hollow when the bottom is tapped. Enjoy hot with butter; homemade bread will go stale within 1-2 days.

For more information on the history of bread: