The path to higher perception 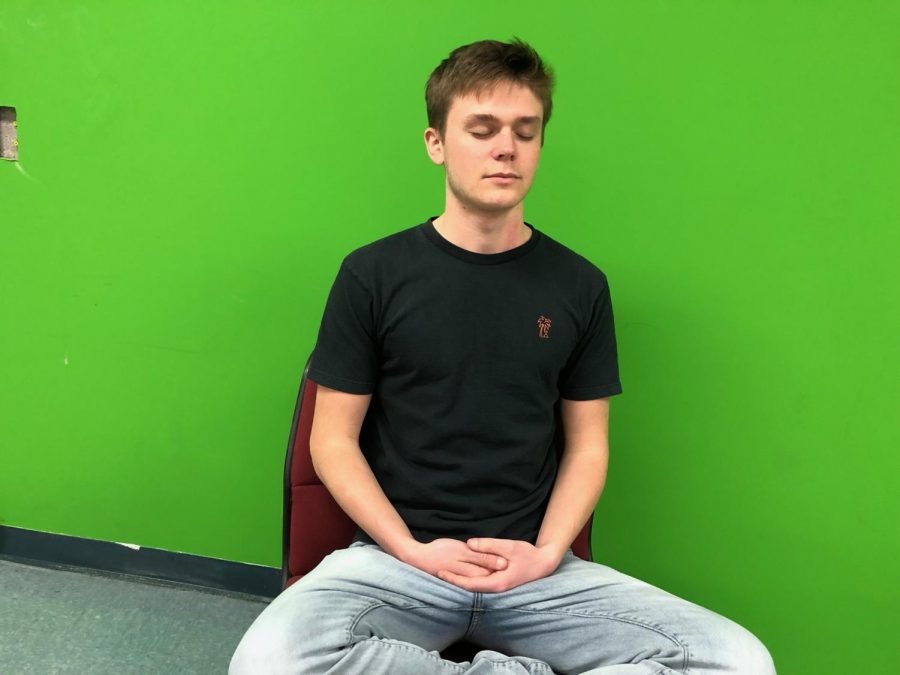 Gloucester High School has welcomed the concept of meditation and learning to the school, with its new Meditation Club leading the way.

The club meets every Thursday, after school in Mr. Roy’s room, and features anywhere from fifteen minutes to an hour of guided meditation.

GHS senior, Thad Fulmer, created and leads the club, with the help of faculty adviser, Mr. Roy. There, Fulmer assists the group with meditation through playing voice segments from the app Headspace, or other soundbites he may have discovered other places on the internet.

A variety of students attend, some who are new to meditation, and others who have been participating in the routine for a while. The students will sit at desks and breath deeply.

Fulmer is an active member in the GHS community, where he is involved in Interact Club, Student Council, and relays the daily afternoon announcements. He also enjoys surfing and plays in two different reggae bands, Cultural Roots(Guitar) and Pier Ave(Bass).

Fulmer had been meditating since Spring of 2017, and since has included many of his friends and classmates in his experience. He sat down with The Gillnetter reporter Danielle Denman to describe his experience meditating, and his continuous path to discovering consciousness.

Q: Describe your relationship with Gloucester.

A: It’s cool to be surrounded by nature and have an upbringing in such a beautiful place. I surf and do a lot of outdoor things, like surfing and walking on the beach. I wanna retire here… if it’s not underwater.

Q: How did you start meditating?

A: I just started doing it at night in spring 2017, sometimes with my friend Vince Mortilarro. I would notice after opening my eyes, colors were more vibrant, my body would feel a lot better. One time we meditated and then ran in the sand at the beach helplessly laughing.

Q: How long does it take someone to get into meditation? Are some people better at it than others?

Q: You seem to use meditation in many different forms? What is considered meditation and what isn’t?

A: For me, it means being aware of yourself and how the inner and outer world are related. It’s not separate from the rest of life, it’s a matter of being completely involved in life and coming to the present moment. It’s less abstract than people think. I think true meditation is sitting, watching and allowing everything in your experience to be as is. It’s to not run away from anything which is sometimes difficult.

Q: Why do you think it’s important?

Q: What does consciousness mean to you?

A: Consciousness means absolutely nothing to me. From my understanding and experience consciousness is nothing.

Q: What is the key to becoming conscious?

A: It’s all about being present in each moment. Even when you’re not sitting in meditation, it is about when you integrate it into your life. Meditation is a means of becoming present.

Q: Now that you’re on the path to discovering consciousness, what is it like?

A: The path I’m on is in the direction of truth because that’s I’ve discovered so far. The path is really lonely, because others aren’t also looking at themselves, they are just distracting themselves. It really hurts to see people I love take actions and live their lives from places of fear, rather than understanding. But I also see a beauty in that which breeds a lot of compassion for those people. In a way I see it as their path. They are living their path as they need to. It also helps me have compassion for myself when I know I am not being true to myself. The way it has been for me, is that once you have any experience with deep awareness, or consciousness, there is no going back into complete oblivion. The amount of suffering from there on out becomes a matter of how tightly you’re going to hold onto oblivion on your way to the truth.

Q: What is one of the most common misconceptions about consciousness?

Q: Do you think everyone should explore their consciousness more?

A: Yes and no. I want to introduce people to it, but at the same time, after a certain point of realization there is no going back. The thing is everybody is conscious, so it’s kind of weird telling someone to find it or look for it, because  they would be searching for somebody they already have. I wouldn’t want to put someone in that position they didn’t want to be there. Once you see something so true there is no going back or unseeing it. What we really desire is reflected in this moment. I can say I want to be enlightened, but right now there are things I want to hold on to more, and that is precisely why I am not enlightened.  The truth isn’t at the top of my list yet. I don’t know what the future holds

Q: What is the most important thing consciousness has made you realize?

A: Those who meditate are trying to be more present, but this is also what many are trying to run from. It isn’t a matter of developing a mindset, it’s a matter of letting go of a mindset. Many believe meditation is filtering your experience, which ultimately can not be true reality.

To learn more about meditation club: attend a meeting on Thursdays after school, or talk to Thad or Mr. Roy in room 2205

*Consciousness: Commonly referred to as ‘opening the third eye’, is the state of being aware of something internal within the mind, or external within the physical or sensory world. It can be defined as an individual’s unique awareness (often simultaneously) of their thoughts, feelings, sensory experiences and environment.