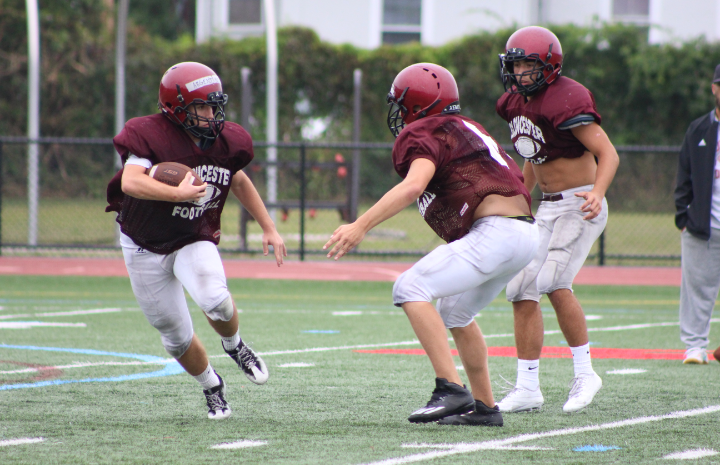 Its that time of year again. School is back, fall is beginning, and Friday nights are about to get a whole lot better.

“I’m excited to see these young kids thrive,” said GHS football head coach Tony Zerilli. “The season will be good, it’s gonna have its ups and downs. We’ve got some really good opponents this year and some new opponents we’ve never played before, so it’ll be exciting to see some new teams out there.”

The GHS football team has a clean slate for their first game on Friday, September 8, when they will face the Revere Patriots on Revere’s home turf.

“It is going to be redemption for our team and we’re going to show that we’re competitors in our league,” said senior running back and corner back AJ Romeo-Oliver.

Last season, the Fishermen beat Revere showing what this year’s senior captains- Matt Smith, Oliver Emerson, and Carlos Hernandez- can do. It shed light on their leadership and how they are going to carry the team this season.

“Last year [against Revere] was a competitive game,” said Romeo-Oliver. “Our line had a good night. Christian Sanfilippo ran the ball effectively and our defense made some key stops. Tony Petrelli also had some good sacks and overall it was a good night for football for us.”

This year, the Fishermen have many juniors and sophomores who are looking to make their mark.

Some names to look out for include junior Marc Smith, a returning starter playing dual roles on defense and offense, and sophomore Daylon Lark, who is looking to showcase his athletic talent after being brought up from JV this year.

To create depth and prepare for anything in the off season, the players are working hard at numerous positions.

The team’s chemistry is one for the books and is crucial to their playing style. Their close-knit and upbeat approach allows them to understand the game and react instinctively. Through this, they can read each other’s blocks and predict each other’s plays.

Even with the young players being brought up to fill spots left by last year’s seniors, the veteran upperclassmen are sticking by their system and are keeping their family atmosphere.

“From one season to the next, that [family atmosphere] kind of attitude permeates the whole team,” said Zerelli. “So when the new group of seniors and captains come on, they have an understanding of what guys did before them and they try to keep that going from year to year.”

Critical changes have been made to the roster this year, like senior captain Matt Smith switching from his previous position at safety to manning the offense at quarterback. Other key players like captain Oliver Emerson, who returns to his role at both tight end and linebacker again this season, will remain in their same spot on the field as last year.

Next week on Friday, September 15, all eyes will turn to Newell Stadium where the beloved Fighting Fishermen will seek victory against the Beverly Panthers in Gloucester’s home opener.

But regardless of the score, the Fishermen can agree on one thing.

“Playing at the pit is indescribable,” said Romeo-Oliver. “Stepping on the field is the best feeling in my life. You could even say it’s electrifying.”