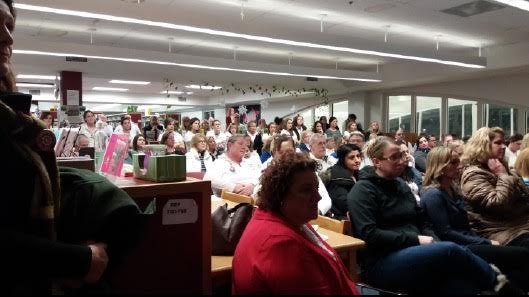 With tensions running high in an almost two year battle between the Gloucester Teachers Association and Gloucester’s School Committee for a “fair and equitable contract,” both parties are now back at the negotiation table after teachers and parents used a February 8th school committee meeting as a platform to voice their discontent with stalled contract negotiations.

“We are looking for an agreement that will keep pace economically and help to attract and retain excellent teachers,” said GTA Correspondence Secretary Rachel Rex. “An agreement that honors the professionalism and skills of our members.”

Almost 150 teachers from every school in Gloucester walked into the meeting unannounced to show solidarity. Parents of elementary children who are teachers in Gloucester, or in nearby communities, also spoke on behalf of the teachers to encourage the school committee to effectively negotiate a new contract.

“As a public school teacher, the best and worst thing I’ve ever heard was from the principal where I work,” said Jeremy McKeen, a parent of three children in the Gloucester school system and a teacher at Lynn English. “He said ‘you guys aren’t paid like professionals, but you are professionals.’ It’s always a fight for teachers.”

As reported in a Gillnetter article last year about a city-wide teacher walk in, 14 health and safety concerns and a push to add 90 hours to elementary teachers’ work year without compensation were the main issues surrounding the contract negotiations.

“There are still many issues that need to be addressed,” said GHS math teacher Gus Martinson. “But for the most part, administration and the DPW are trying to address as many [health and safety] issues as they can.”

Martinson also stated that about half of the initial health and safety concerns have been addressed, and the roof  and windows at GHS are in the process of being fixed.

But because negotiations are still on the table, the current contractual issues will not be discussed by either party.

“Unfortunately, the city in giving more for education has not recognized the expensive cost for education,” said GTA President Andrea Tarantino.

Tarantino and the GTA are in search of a “fair and equitable contract,” and according to Mike Shannon of the Massachusetts Teachers Association, “This isn’t about money, it’s about time.”

School Committee Chairman Jonathan Pope stressed the complexities of the situation as teachers walked out of the Feb. 8 meeting together to show solidarity.

“[The school committee] is not an income producing organization. No matter how hard you work or how good of a job you do, we can’t get more money. We don’t like that, but that’s how it is.”

At the time of the meeting, negotiations had been stalled between the school committee and GTA.

“We reached a point in the negotiation where we were not making progress,” said Pope. “Our goal is a three year contract.”

The school committee has applied for a mediator to continue negotiations. However, negotiations are currently taking place without a mediator.

“The issue is having enough time for having everything done and still maintaining the continuity of loving learning for your students,” said Tarantino.

Parents and teachers alike are concerned with the progress of negotiations, and the fate of the contract. GHS paraprofessional Jessica Bean proposed taking drastic measures to ensure a revised contract if teachers’ demands are not met.

“If the contract can’t be negotiated, we have chosen the wrong people to represent us and we will have to make changes next election.”