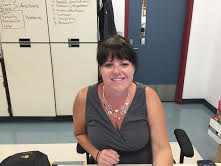 She began her teaching career when she discovered her love for watching kids learn and love art. “I love giving back to students, having them be able to benefit from it and enjoy what they’re doing,” said Harney.

Harney attended LUCAD school of Art to study photography after high school. During her time there, and in high school,  she was always hearing from her classmates that athletes got more recognition than art students. However, Harney viewed athletes as artists, like herself.

Harney started with professional boxer Micky Ward. For the last three years of his career, she has worked with him. According to Harney, “I’d be at the matches and I wouldn’t see any other women around. I had been one of two women known in the world for photographing boxers.”

Since she had been working with professional boxers for 15 years, she had began to understand that they were misunderstood. Before teaching, she worked for a boxing magazine before it went amuck. You can find some of her work in the movies Next Great Champ, The Fighter, The Avengers, Real Steel, and upcoming movie Creed.

Harney wants her students to understand that “Photography is a tool and a voice for people, just like it was for me. It gave me my voice and I hope it gives others the voices they need,” said Harney. “By taking the photography class, you will learn to express yourself through photos and give the kids who aren’t usually vocal, a voice.”

Although her passion doesn’t pay well, Harney still loves what she does. “I believe that you really have to love what you do, its like my own version of an enjoyable lifestyle. I have my three dream jobs: being a mother, teaching kids, and photographing boxers.”