Yes, you are wearing your IDs 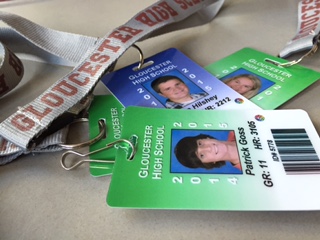 Some time has passed since the wearing of student IDs became mandatory. You may be wondering, how successful has this new rule been?

According to recent data from the first month, this new rule has been relatively successful.

Teachers are enforcing it, and students are conforming to the rules. Students are less resistant and more open to the idea. This represents a change from last year, when few students complied with the mandatory ID rule.

“Its really not a big deal.” said student, Katie Nugent. “Students just don’t like them because its just one more way for us to be controlled.”

The first week, 189 temp IDs were given out. The numbers continued to decrease within the first month. During week two, 141 temporary stickers were given out.  The third and fourth weeks dropped to double digits, with 58 offenses in week three, and 67 in week four.

There were 455 temporary ID’s issues in the first month.

“I am pleased that we have a 90 percent or so success rate.” said GHS Principal Erik Anderson. According to Anderson, students have been very good about the IDs. Administration has been trying to enforce this rule as best as they can, without coming on too strongly.

“If we don’t follow the admins rules, then why should students follow ours.” said GHS Italian teacher Celestino Basile. “Whether or not you agree with IDs, it does not matter as long as its mandated.”

Students who forget their IDs should to go to the office, where they will receive a temporary ID. Usually, a temp ID is a sticker name tag with your grade and student identification number.

Recently people have been seen wearing a blank ID that just says “student”. Those IDs are given out only when Mr. Kobs or Mr. Gallinelli are not available.

Overall, students have complied very well to this rule and things are looking up.