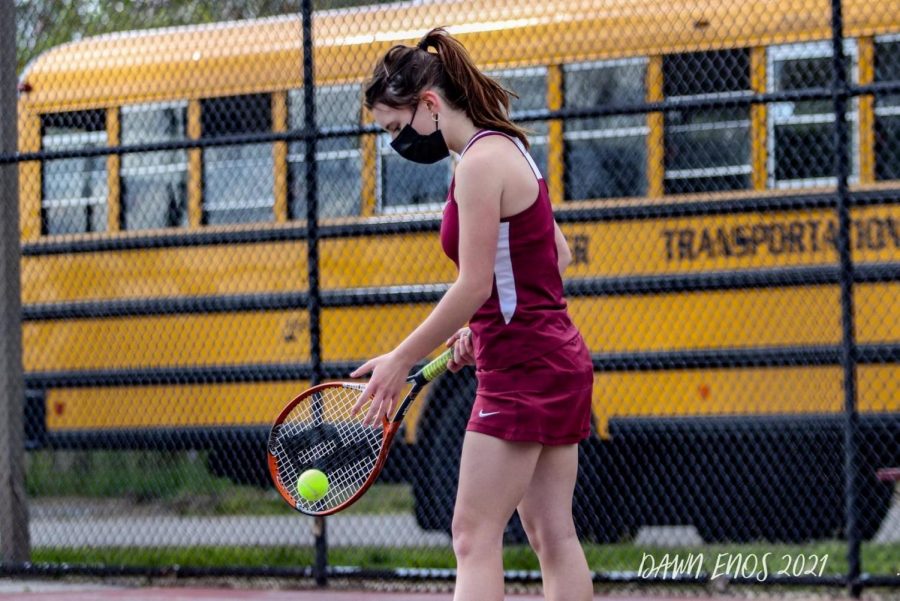 Junior Isabelle Nixon prepares to serve in her singles match

GHS Fishermen girls tennis team faced off against the Winthrop Vikings on Monday the 17th. After a difficult match up, the Fishermen lost 0-4, with one match ending in a forfeit.

Junior Isabelle Nixon played a tough match in first singles. After a score of 6-4 in the first set and 4-6 in the second set, the girls went into a third set ending with 2-6.

Usually, a match will last an hour and a half, but Nixon played for an hour extra. After the exhausting match the point went to Winthrop, but overall Nixon played a great game and held her own.

Sophomore Sophia Picano played second singles, losing in the first set 4-6. During the second set, Picano was up but the game ended abruptly when the Winthrop player forfeited due to an injury. The forfeit meant no one got the point, but Picano still showed off her quick reflexes during the game.

In third singles, junior Summer Pereira was absent, so junior Ava Vitale filled in. Playing in a different position than usual, she showed her team she could take what she was given and roll with it. Overall, Vitale lost 0-6, 0-6, but played well nonetheless.

Junior Bailey Saputo and sophomore Maggie Sperry played first doubles. After being up in the first set, an issue with the Winthrop coach led to Gloucester losing multiple points. The game ended with scores 4-6, 2-6. Despite the setback, both girls played a strong game.

Second doubles were played by sophomore Marisa Vincent and sophomore Emily Gossom. The girls worked hard during their sets, but ended with a loss of 2-6, 2-6.

After Winthrop, Gloucester played Beverly losing 0-5 again, but the girls hope for a comeback against Salem on Friday, May 21st.