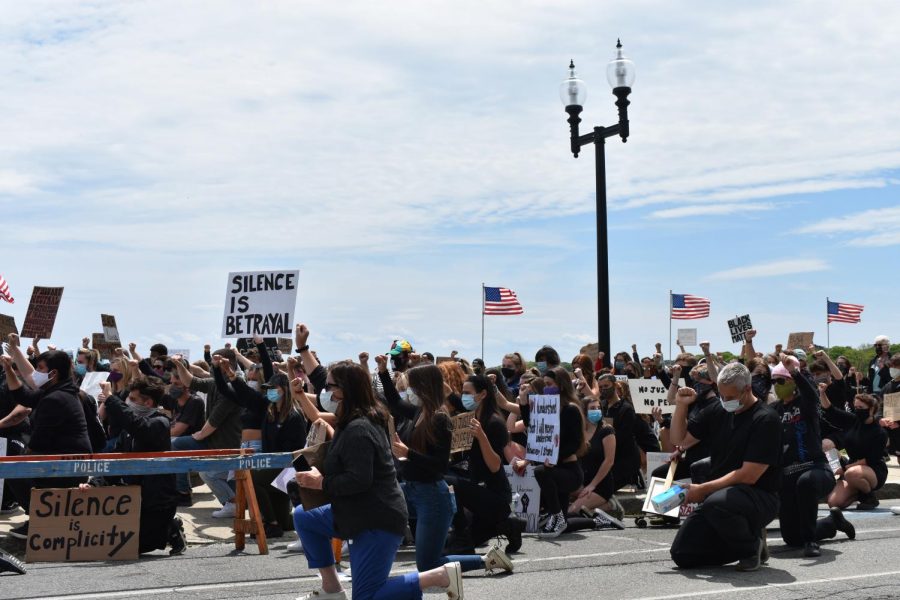 The event was organized by Emily Palk, a member of this year’s graduating class from Gloucester High School. Part of her inspiration for organizing the protest was a school project she was working on.

“At first it was Ahmaud Arbery who got shot in Georgia by those two white supremacists. Then I had to do a project for school for my photography class and I did it on these issues; the unjust killings of black people and racial inequality in America. As I was doing that project, the news of George Floyd broke and I got such a good reception to that project that I felt like I wanted to do more and I needed to do more and use my privilege for something good. So I decided to organize the event.”

“I think it’s important, especially during this time, that we realize racism is alive everywhere, including in Gloucester,” said Muller  “Being black in the United States is a crime that we have to serve time for mentally, emotionally and physically.”

Muller, a sophomore, went on to say “I want people to remember that George Floyd, Breonna Taylor, and Ahmaud Aurbrey are not just names or hashtags, but they are real people who had lives just like the rest of us.”

Mayor Sefatia Romeo Theken spoke briefly. The crowd then performed a few chants and kneeled in solidarity with the many innocent black Americans killed in recent years.

The protesters then marched to City Hall where the Mayor gave a longer talk emphasizing the importance of voting. From there, the crowd marched back to the Fishermen’s memorial, where more people spoke.

Edgardo Pagaza, a Rockport High  graduate of the class of 2018, expressed his hope for the movement and appreciation for the success of the event.

“I’m here to support the movement and see the community come together. It is cool to see people that I haven’t seen in a long time coming together now.” Pagaza explained. “To see people supporting a movement that most people in this community aren’t directly affected by. I’m here to let people know we are serious and we demand change.”

Many current and former Gloucester High School students at the event, all essentially fighting for the same thing; change.

“This us is putting our foot down and deciding that we will not tolerate this anymore. We’re standing against police brutality, we’re standing against what happened to George Floyd and every other name on that list which has gotten way too long,” said GHS Junior Catherine Canavan-Dysthe. 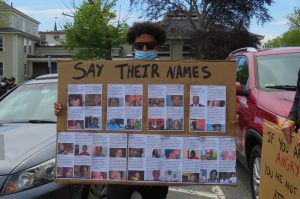 GHS graduate Caleb Perry (‘19) has similar hopes.  “I hope change comes. I hope that we’ll have a police force that isn’t using its power to oppress its people. I hope that black people will be able to go outside without fearing for their lives.”

“I thought it was a peaceful protest,” said Gloucester police Lt. Jeremiah Nicastro, who runs the community impact unit. “We understand what the protest was about, and we support what their cause is.”

“It’s important to come to protests because the more people you get together, the more attention you bring,” said Vietnam veteran Joseph Poririer, who has lived in Gloucester and Rockport his whole life. “I’ve seen so many demonstrations, from the women’s march back to no nuclear power and anti war time.  it finally gets to a point where things begin to boil over. There’s an energy and you have to tap in to keep things moving.”

GHS graduate Danny Williamson (‘08) was pleased with the big turn out and also hopes to see change soon.  “Seeing everyone here really shows how much this town and community cares. It also shows how we all want change and that enough is enough.”